The Introduce Of Hydrogen Peroxide Technology

We are Hydrogen Peroxide Plant Supplier to domestic and overseas customers.

Hydrogen peroxide, chemical formula H2O2. Pure hydrogen peroxide is a light blue viscous liquid that is miscible with water in any proportion. It is a strong oxidant. The aqueous solution is commonly called hydrogen peroxide and is a colorless transparent liquid. Its aqueous solution is suitable for medical wound disinfection and environmental disinfection and food disinfection. Under normal circumstances, it will slowly decompose into water and oxygen, but the decomposition rate is extremely slow, and the speed of the reaction is accelerated by adding a catalyst such as manganese dioxide or the like, or irradiating with short-wave radiation.

Hydrogen Peroxide Production Methods, is the easiest peroxide (defined as atoms with 2 oxygen atoms covalently bonded to one another). It's largely used as a bleaching agent and as an oxidizing agent at the pulp-and-paper, cosmetic, pharmaceutical, chemical, electronics, and textile businesses. The usage of H2O2 as a raw material in the production of propylene oxide has considerably increased in the past few decades. 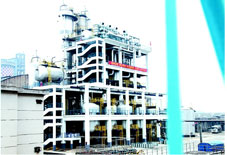