Formaldehyde is the main raw material for the manufacture of value-added chemicals such as melamine, urea-formaldehyde and phenolic resins. The most common product is in a 37% aqueous solution, but concentrations can be as high as 57%. Today, there are two main routes for industrial-scale production of formaldehyde: oxidation-dehydrogenation using silver catalysts, including complete or incomplete conversion of methanol; and direct oxidation of methanol to formaldehyde using metal oxide catalysts (Formox process).

As an important component of chemicals used in the production of resins, adhesives, plywood and particle board, insulation materials and lubricants, formaldehyde is produced commercially through the catalytic oxidation of methanol. The production of formaldehyde from methanol using a silver catalyst is carried out at high temperatures and produces formalin, a 37% aqueous solution of formaldehyde. Iron oxide catalysts used with molybdenum or vanadium in the formaldehyde production process also typically produce formalin, but can be optimized to produce concentrations as high as 57%. Higher concentrations can reduce transportation and storage costs and can be diluted later to the desired concentration. Formaldehyde production processes using metal oxide catalysts are considered more advanced and are common in high-volume, high-tech manufacturing facilities. 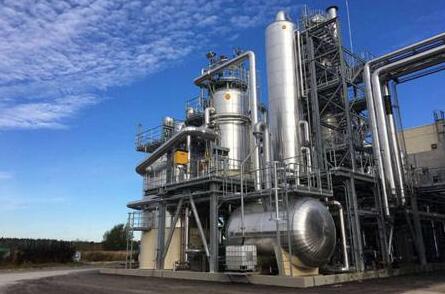 Therefore, less methanol is required to obtain better results than the silver catalyst process. This is advantageous because raw material is the main input cost in formaldehyde production. In this formaldehyde production process, the lower methanol content in the feed mixture compared to steam and air keeps it below the explosive range. Since the vast majority is converted to formaldehyde, the resulting solution remains relatively pure with only very small amounts of carbon monoxide, dimethyl ether, carbon dioxide and formic acid byproducts.

Vaporized methanol, air (and sometimes tail gas from previous cycles) passes through the iron oxide catalyst in the reactor. The transfer fluid captures the oxygen and the heat given off during the conversion of methanol to formaldehyde. The heat is converted to steam that can be used for other plant uses, such as heating resins produced at the same site. The gas, including formaldehyde, enters the absorption chamber where it condenses into an aqueous solution in the water entering the chamber. After anion exchange reduces the formic acid content of the solution, the resulting product may contain up to 55% by weight of formaldehyde, depending on the amount of water introduced into the absorption chamber.

Performed at reactor temperatures of 600 degrees C and above, the silver catalyst reaction is less efficient than the iron oxide process. This is because, while iron oxide converts almost all methanol according to the above stoichiometry (2 CH 3 OH + O 2 → 2 CH 2 O + 2 H 2 O), the silver process converts some methanol through the dehydrogenation reaction.

Compared to formaldehyde production processes, which are designed to convert almost all methanol, the silver process is carried out using higher concentrations of methanol, which consumes almost all of the oxygen. Manufacturing plants using silver catalysts use one of two sub-processes.

Heating the feedstock to approximately 700 degrees Celsius increases the rate and equilibrium of the heat-absorbing dehydrogenation reaction enough to convert 97% to 98% of the methanol. After cooling to shut down unwanted side reactions, the vapor mixture enters the absorption column where formaldehyde is eluted to 40-55% by weight with a small amount of aqueous methanol and formic acid (generated from excess oxygen present in the formaldehyde production process).

The feedstock is heated to approximately 630 degrees C to minimize unwanted secondary reactions. The formaldehyde production consumes all the oxygen, but the methanol conversion is only 77-87%. Again, the gas is cooled and sent to the absorption tower. The aqueous product contains about 42% by weight of formaldehyde. Since this solution may contain 20% or more unconverted methanol, it is moved to the distillation column to remove these unreacted gases for recirculation into the process. The solution after distillation can be further processed to reduce the formic acid content and increase the formaldehyde concentration to 55% by weight with a yield of 90% or more. Some manufacturers install a second catalytic converter to convert more methanol, avoiding leakage and eliminating the need for distillation and recovery.

We have noted that the iron oxide formaldehyde production process is a more efficient way to produce formaldehyde from methanol. However, in addition to the feedstock costs, plants using the silver catalyst process may experience lower operating costs. Therefore, if a cheap source of methanol is available, silver may be the better choice, especially for smaller operations. Several other variables are involved in deciding which formaldehyde production process to use.

✱ Plant capacity - Low capacity formaldehyde production facilities - It may be more economical to use the less technical silver process to produce up to 5,000 tons of formalin per year. Larger plants with capacities up to 100,000 tons per year are best suited for metal oxide catalyst formaldehyde production processes, and increased capacity can help recover higher technical capital expenditures. Note that the required oversized gas piping can make facilities over 100,000 tons per year inefficient. It is recommended that large operations split production between medium sized metal oxide processing units.

✱ Off-gas treatment - The off-gas from the silver process contains about 20% hydrogen, which can be used for combustion, steam generation and elimination of carbon monoxide and other environmentally harmful organic compounds. The tail gas from the iron oxide process is not flammable because the levels of dimethyl ether, carbon monoxide, methanol and formaldehyde are too low. Combustion requires a catalytic incinerator or added fuel.

✱ Steam Production - The metal oxide process generates enough steam heat to be exported from the production unit to power other processes. The relatively low steam production in the silver process is completely consumed in methanol distillation - sometimes not enough and steam must be supplied externally. There is never any excess steam available at the outlet.

No matter which formaldehyde production process you choose, Phoenix Equipment can help you find the best formaldehyde production equipment for your needs. Purchasing used equipment can save you significant money and greatly reduce the time required to build or expand your manufacturing facility. We are confident that we can help you find exactly what you are looking for. Contact us today to speak with one of our experts. We look forward to hearing from you.