Distillation tower-a large cylindrical column packed with trays, plates or packing to achieve better contact between the two phases-usually used in industrial distillation. In the past 12 years, equipment suppliers have made continuous and substantial improvements to tower internals. For example, these include Raschig Super-Ring, sandwich packing, and high-performance distillation trays.

Academia has developed very complex mathematical tools for conceptual distillation design. Many of these tools have been adopted by end users in the chemical and petrochemical industries and opened up new ways to determine the best separation scheme, process modeling and optimization. 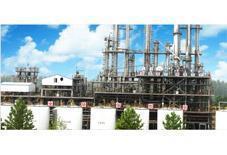 However, the biggest challenge is the development of large-scale equipment and better integration of distillation with other unit operations, such as pervaporation (a membrane process for purifying liquid mixtures), vapor permeation, organic solvent nanofiltration, and extraction [7]. For this reason, more detailed models and design tools are needed to handle multi-component and multi-reaction systems, and to manage the complexity of a large number of potential process configurations and a large number of potential solvent-membrane candidates. To

Smart use of energy

Given that the chemical industry consumed 19% of Europe's energy in 2009, distillation is clearly an important driver of overall energy consumption. We need to reduce its energy consumption in the following ways

Further improve the overall performance of the tower internals;

Use better solvents for extraction or azeotropic distillation;

Integration of distillation with other separations such as reactants, adsorbents and membranes.

Alternative energy sources such as microwave, plasma, ultrasound, electric field and light have the potential to improve chemical synthesis in terms of energy and resource efficiency. Currently, the practical application of alternative energy sources (such as microwaves) is far from being ready for distillation. Ultrasound can be used to increase the mass transfer area, rather than as a source of energy input. Basic research is needed here and is being carried out as part of a number of European and national projects.