Home > News > How Is Hydrogen Peroxide Made?

How Is Hydrogen Peroxide Made?

Before we explore how hydrogen peroxide is made, let’s look at what it is. Hydrogen peroxide (chemical symbol H2O2 – it’s basically water with an extra oxygen atom!) is a weakly acidic, colourless liquid which can easily be mixed with water. It can also be pale blue in its pure form, although as it is an unstable compound and decomposes when exposed to heat, it is usually kept in a slightly acidic solution in the presence of a stabiliser.

Pure H2O2 is a colorless odorless thick and transparent fluid. In large amounts, its color appears to be light blue.

It is soluble in water, ether and alcohol.

This puts blisters on the skin.

How Is Hydrogen Peroxide Produced?

To put it in more complex terms, hydrogen peroxide is generally made according to this four-step process:

Hydrogenation on a palladium catalyst creates a reaction between hydrogen and anthraquinone which produces anthrahydroquinone.

The palladium catalyst is filtered out of the solution.

The hydrogen peroxide is extracted, purified, and then concentrated by vacuum distillation.

Hydrogen peroxide also occurs naturally in surface and groundwater, as well as in the atmosphere. It is also made in humans and animals as a part of biochemical processes.

The industrial manufacture of H2O2 can be achieved by steam distillation at a low pressure of Perdisulphuric Acid. About 30% solution of H2O2 is obtained by this method.

Over 99% of the world’s hydrogen peroxide is manufactured by an autoxidation process. While the overall equation for this process is fairly simple (H2 + O2 -> H2O2), there is obviously a lot more to it than that!

In this method, ammonium sulfate and dilute sulfuric acid solution are electrolytic. In electrolytic, hydrogen is obtained at the cathode and Ammonium persulfate ((NH 4) 2S 2O 8) at the anode.

H2O2 is obtained by distillation of Ammonium persulfate with dilute sulfuric acid at low pressure.

Hydrogen peroxide is used as an antiseptic as it kills bacteria. When you put hydrogen peroxide on a cut, you might notice that it starts to foam. That’s because the chemical breaks down when it comes into contact with blood. An enzyme in your blood called catalase attacks the hydrogen peroxide, turning it into oxygen and water.

Hydrogen peroxide should be stored in a cool (between 5-25°C), dry area away from heat and direct sunlight, and kept well away from anything flammable as it can increase the risk or intensity of fire even though it doesn’t burn itself. It should be stored in a stable container made of plastic or glass (metal containers should not be used as hydrogen peroxide can react with metals).

►It is used in bleaching hair, wool, etc. as bleaching.

►Being antiseptic, it is used to clean wounds, ears, teeth etc.

►It is used as propellant in rocket.

►It is used to prevent many substances like milk wine etc. from rotting.

►Used in retrieving the colors of old paintings of oil-dyed dyes. 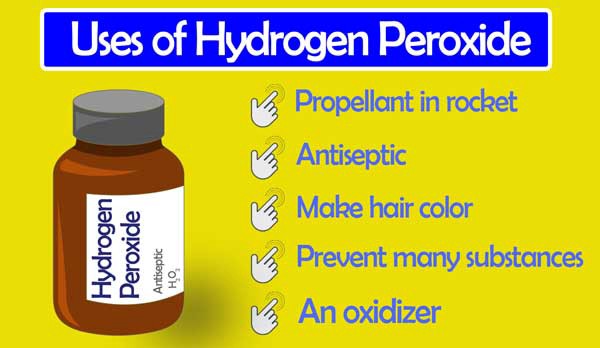