Why is the pollution of industrial Formaldehyde Production small?

At present, the main sources of pollution in China's formaldehyde industry are waste gas, waste water and noise.

For the treatment of waste gas: most of China's formaldehyde production uses silver process. In this production process, methanol enters the reactor with air and water vapor, and undergoes oxidation and dehydrogenation reactions under the catalysis of a silver catalyst to formaldehyde. Among them, the oxidation reaction of methanol starts at about 200 ° C. The heating process is heated by an electric heater, and no boiler heating is required, which reduces the atmospheric pollution of coal-fired boilers. On the other hand, tail gas is generated during the production of formaldehyde. The tail gas processor is used in the process to burn off the polluted gases in the tail gas, and the heat is converted into steam through a heat exchanger, which can be connected to the steam pipe network. 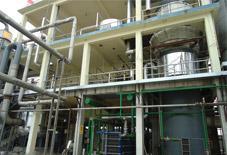 About noise reduction: The source of noise in the Formaldehyde Production Process is mainly Roots blowers. Generally, manufacturers will place the blowers in a soundproof room separately, and install silencers on the inlet and outlet pipes of the blowers to reduce noise pollution.

Although the production process of industrial formaldehyde is basically pollution-free, formaldehyde is a hazardous chemical. After all, production of formaldehyde must strictly comply with a number of environmental laws and regulations. Enterprises must hold safety production permits, and new installations must undergo environmental assessment, It can be put into production after safety assessment. However, due to the relatively simple process of formaldehyde, the low cost of the device, and the inadequate supervision of some local departments in the early stage, many formaldehyde companies have “produce first and then approve”, that is, the device is put into production without approval from relevant departments. During environmental and safety inspections, these incomplete companies will inevitably need to suspend work for rectification, which will affect the start of the formaldehyde industry in stages.

Washing equipment: Mainly to ensure the cleanliness of formaldehyde production air, an additional equipment for washing air was added.

The appearance and internal structure of the washing tower is like an absorption tower, which is mainly composed of tower body, packing, demister device and spray device.

Water or lye is sprayed from the top to infiltrate the filler, and through the self-distribution function of the filler, it has a very uniform effect on the liquid distribution. Harmful impurities such as SO2 and SO2 pass through the defogging device to remove the water mist that may be carried out in the tower, and then enter the evaporator. Its advantage is to make the air participating in the reaction cleaner and increase the humidity of the air.

Our company also has Formaldehyde Production Silver Process on sale, welcome to consult.