The commercial production of formaldehyde first started in Germany in the 1880s, but the development of the methanol  synthesis route in the 1920s promoted the development of large-scale manufacturing. There are two main routes today: oxidative dehydrogenation using silver catalysts, including complete or incomplete conversion of methanol; and direct oxidation of methanol to formaldehyde using metal oxide catalysts.

In the silver catalyst route, at a temperature of about 650oC, methanol evaporated by air and steam passes through a thin bed of silver crystal catalyst. Formaldehyde is formed by the dehydrogenation of methanol. The heat required for the endothermic reaction is obtained by combusting the hydrogen contained in the exhaust gas produced by the dehydrogenation reaction. 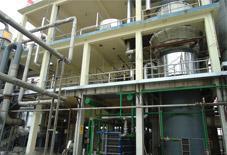 Another route involves the oxidation of methanol on a catalyst of molybdenum and iron oxide. The mixture of air and methanol is evaporated and passed into the reactor tube containing the catalyst. The reaction at 350oC is highly exothermic and generates heat to provide steam for turbine and process heating.

Our company provides a high-pressure version of the Formox process, which can modify existing plants to increase production capacity. The high conversion rate of the process eliminates the need to recover methanol through distillation, and it can produce formaldehyde with a concentration of up to 57%.

The yield of the two processes is about 90% to 92%, but the reaction temperature of the oxidation route is lower, and the metal catalyst is cheaper than silver. However, the partial oxidation-dehydrogenation route is still the most common.

A wide range of alternative raw materials have been considered, but none have been found to be economical. For example, small amounts are produced by the non-catalytic oxidation of propane-butane mixtures. Formaldehyde can be produced from methane, but the product mixture needs to be separated. It is also a by-product of the oxidation of naphtha to acetic acid.

Our company also has Formaldehyde Production Silver Process on sale, welcome to contact us.