Formaldehyde has been a key platform reagent in the chemical industry for decades in a large number of large-scale industrial processes. As a result, the global annual demand reaches 30 megatons per year, and it is currently produced only under oxidizing, energy-intensive conditions, using high-temperature methods for methanol oxidation. In recent years, in addition to the use of formaldehyde and its derivatives, new areas of application have been suggested, namely the use of synthetic reagents or disinfectants. For example, dialkoxymethane can be envisaged as a direct fuel for internal combustion engines or as an aqueous solution of formaldehyde, and paraformaldehyde can be used as a liquid organic hydrogen carrier molecule (LOHC) for hydrogen generation in hydrogen fuel cells. In order to translate these new ideas into a viable approach, new low-energy technologies for the synthesis of formaldehyde are also needed. This visionary paper elucidates the latest directions in the low-temperature reductive synthesis of formaldehyde and its derivatives and low-temperature formaldehyde reforming for hydrogen production. These aspects are important for the future needs of renewable energy management (in the form of methanol and hydrogen economy) for modern society. 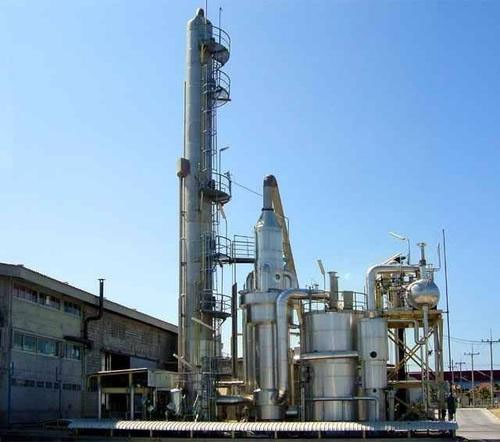 Formaldehyde is widely present in the natural and anthropogenic environment due to multiple natural and artificial decomposition pathways of biological and artificial organisms. Currently, these formaldehyde production pathways still play a minor role in terms of their value in industry. However, this will change when plant biomass processing based on renewable resources will be fully developed to replace fossil-based processes, leading to biomass-derived formaldehyde production. Formaldehyde has been used for decades as an important component (i.e. cross-linking agent) in everyday household products such as germicides/disinfectants in hospitals, pharmaceuticals, paints/inks, cosmetics, resins, polymers/adhesives, etc. The commercial importance of all these branches sums up to a global multi-billion dollar market with an annual demand for formaldehyde of more than 30 MMT, respectively for paraformaldehyde and forecasted to grow at 4% per year. However, to date, formaldehyde has not played a significant role as a platform compound in the global energy storage sector, although it offers interesting properties compared to other alternative solutions. For example, formaldehyde ethers (OME), synthesized from formaldehyde and alcohols, are being investigated as potential candidates for combustion fuels and fuel additives. It is conceivable to extend this approach using long-chain bio-derived alcohols to yield long-chain OME suitable for supplementing biofuels such as biodiesel.It is worth mentioning the long-standing application of solid formaldehyde derivatives as solid fuel tablets for direct combustion since the 1930s, often in small camp stoves, especially in military equipment. These ashless combustion fuel tablets consist of 1,3,5-trioxane or, more commonly, hexamethylenetetramine (also known as urotropine), the latter often sold and known under the commercial name Esbit®. In addition, formaldehyde can be harvested in the form of OME during lignin depolymerization using ethanol as a formaldehyde scavenger, so OME would be a valuable by-product of the aromatics production process. In another context, formaldehyde impurities also play a role in the safety and storage issues of aqueous nuclear waste disposal due to the observation that formaldehyde-containing nuclear waste produces a flammable mixture of H 2 and N 2 O. In this regard, novel formaldehyde decontamination technologies are desirable for the safe pretreatment of contaminated and potentially flammable wastes prior to storage or further processing. From another point of view, formaldehyde itself is a hydrogen-rich molecule containing 6.7 wt% H 2 in the gas phase, while in aqueous media this value rises to 8.4 wt% due to a favorable equilibrium to methanediol. Thus, it offers the potential to become suitable as a liquid organic hydrogen carrier (LOHC) molecule for the delivery of hydrogen with high purity in hydrogen fuel cell technology. In this respect, it may be more attractive than the C 1 group of hydrogen-rich methanol (12.5 wt%) due to its different thermodynamic properties. In contrast to methanol, which requires a large energy input in an energy-absorbing methanol reforming process, the formaldehyde reforming process is exergonic and therefore more feasible for a self-sustaining hydrogen delivery pathway. In combination with low-temperature formaldehyde synthesis, formaldehyde reforming will yield rechargeable hydrogen cells suitable for hydrogen fuel cell technology.

Due to the early commercialization of formaldehyde, its production was based on an energy-intensive gas-phase process via partial oxidation and/or dehydrogenation of methanol (i.e., the Formox process). Interestingly, there are early reports of chemical, photochemical and especially electrochemical and high temperature attempts to reduce CO and CO 2 to formaldehyde as early as the late 19th century, at least since the 1870s; methods for the pyrolysis of formaldehyde to synthesis gas (CO/H 2) are available in the literature. These early attempts have been forgotten for about 80 years due to the unpopularity of thermodynamics. Methanol production from CO 2 has been achieved, and Carbon Cycle International (CRI) has even installed a CO 2 methanol plant in Iceland (meeting about 3% of Iceland's energy demand), and the Formox process and the associated methanol oxidation process remain the state-of-the-art for formaldehyde production. Therefore, even though more sustainable methanol production is possible, formaldehyde production remains massively energy (300-400°C) and cost intensive. Currently, more than 35% of global methanol production is used to meet global formaldehyde demand, making formaldehyde the number one product derived directly from methanol. Conventional formaldehyde production consists of a high-energy three-step production line for formaldehyde, including natural gas steam reforming (700-1100°C) to syngas, followed by methanol synthesis (200-300°C) and finally partial oxidation/dehydrogenation of methanol (300-400°C) to produce formaldehyde as the main product.

In 2013, Sabo-Etienne and Bontemps worked with pinacol borane with [RuH 2 (η-H 2 ) 2 (PCy 3 ) 2 ] ( Cy = cyclohexyl; 10 mol%) as catalyst precursor.The key step in CO 2 reduction is the insertion of CO 2 into the hydrogenated ruthenium bond. Later the authors showed that an iron-catalyzed pathway involving metal hydride catalysts is also feasible for the generation of boron methylene derivatives with good selectivity. Similarly, in addition to iron, copper and cobalt phosphine complexes are also active for the borylation of CO 2, resulting in a mixture of bis(boron alcohol acetal) and methoxyborane with broad selectivity for both products.

Formaldehyde as a hydrogen source

The dehydrogenation of aqueous formaldehyde and paraformaldehyde to H 2 and CO 2 is more straightforward than the above-mentioned obstacles and challenges in the synthesis of formaldehyde under reducing conditions starting from CO 2 and CO, even so, it has rarely been considered and studied in contrast to the long-term studies of hydrogen precipitation from formic acid or methanol.

Recently, we found that the presence of C 1 entities such as (p-)formaldehyde (6.7 wt% per unit) in water is suitable for molecular hydrogen storage, since these molecules can be easily and selectively dehydrogenated to form pure H 2 and CO 2 . Considering 1 equiv , the theoretical efficiency of H 2 is 8.4 wt%. H 2 O and H 2 become possible due to the good equilibrium constants of methanediol in aqueous solution, CO In this respect, the combination of water into formaldehyde molecules to produce methylene glycol can be interpreted as a chemical indirect hydrolysis reaction in which water acts as a proton source and formaldehyde as a hydride source. the H 2 content is higher than that of formic acid (4.4 wt%), even when using an industrial aqueous solution of H 2 CO, which has a minimum efficiency of 5.0 wt%. this catalytic decomposition of H 2 CO can be envisaged as a simultaneous production of H 2 and of as a new method for the purification of wastewater containing formaldehyde impurities, as a waste-to-value method.

During this decade, significant progress has been made in the low-temperature synthesis of formaldehyde and its derivatives from CO and CO 2 . For the first time, the prospect of direct synthesis of formaldehyde from syngas has been realized. Similarly, the synthesis of dialkoxymethane by catalytic reduction of CO 2 has been demonstrated. Furthermore, the electrocatalytic conversion of CO 2 to formaldehyde using seawater as an electrolyte shows further promising directions.These new pathway-chemistry challenges in C 1 open new windows of opportunity for more sustainable cost and energy efficient production chains using formaldehyde as a platform reagent. If future hydrogen production processes will use renewable energy sources or fresh water, these methods may be independent of fossil resources. The same effort will be needed for future syngas production using biomass or organic waste as feedstock. Since the thermodynamic parameters induced by the reaction nature subsolvent have a huge impact on the entire reaction pathway and the reactivity of all solutes, the scheme of stabilizing formaldehyde in solution with water and alcohols will play a key role in further improving these reductive syntheses species and intermediates: methanediol in the case of formaldehyde, (di)alkoxymethane or carbonate and carbonate in carbon dioxide 2 examples are the dominant species in solution. Other approaches to stabilize formaldehyde in solution include the formation of bis(methylsilyl) or bis(boryl) methylene acetals, which may generate further interest in inorganic materials with formaldehyde as a crosslinker. selective hydrogenation of CO 2 to formaldehyde remains the missing piece of the C 1 puzzle. Similar to CO hydrogenation in water, the key hydrogenation of selective CO 2 may be the use of water as a solvent to capture formaldehyde in the form of methylene glycol, and therefore formalin solution. Notably, free formaldehyde can also be obtained by applying FDH and FADH in sequential enzyme catalysis in the presence of NADH as cofactor. This clearly indicates that biotechnological pathways may one day be expected to supplement the global demand for formaldehyde in the large quantities required for today's established applications.