Home > News > Do you know the Industrial Manufacturing Method of Hydrogen Peroxide?

Do you know the Industrial Manufacturing Method of Hydrogen Peroxide?

As a Hydrogen Peroxide Plant, share it with everyone.

Alkaline Hydrogen Peroxide preparation method: quinone-containing air electrode for the production of alkaline hydrogen peroxide. It is characterized in that each pair of electrodes is composed of an anode plate, a plastic mesh, a cationic diaphragm and a quinone-containing air cathode. It is equipped with a distribution chamber for entering fluid and a collection chamber for discharging fluid. There is a throttle hole at the fluid inlet. The multi-element electrode adopts a restricted dipole series connection method, and the plastic soft for the inlet and outlet of the anode circulating alkali water is lengthened. The tube is then connected to the header pipe, and the multi-element electrode group is assembled by the unit electrode plate. 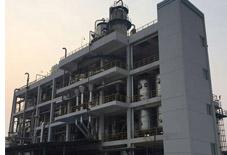 Phosphoric acid neutralization method: It is characterized in that it is prepared from an aqueous sodium peroxide solution with the following steps:

(1) Neutralize the sodium hydroxide solution to pH 8.0-8.7 with phosphoric acid or sodium dihydrogen phosphate to generate an aqueous solution of NaH2PO4 and H2O2.

(5) The vapor containing H2O2 and H2O is subjected to vacuum fractionation in a fractionation tower to obtain about 30% H2O2 product.