Home > News > What are the Precautions for Ethyl Acetate?

What are the Precautions for Ethyl Acetate?

As an Ethyl Acetate Plant Supplier, share with you. 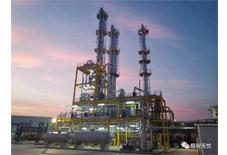 1. The esterification reaction is a reversible reaction. In order to increase the yield of esters, the reaction must be made as far as possible to facilitate the formation of esters. Generally, one of the reactants acid and alcohol is made in excess. In industrial production, which kind of excess is better, generally depends on whether the raw materials are easily available, whether the price is cheap, and whether it is easy to recycle and other specific circumstances. In the laboratory, the method of excessive ethanol is generally used. The mass fraction of ethanol should be high, and the effect would be better if the ethanol with a mass fraction of 95% could be replaced by anhydrous ethanol. The amount of concentrated sulfuric acid used in the catalysis is very small. Generally, the catalysis can be completed as long as the quality of sulfuric acid reaches 3% of the mass of ethanol. However, in order to remove the water generated in the reaction, the amount of concentrated sulfuric acid should be increased slightly.

2. When preparing ethyl acetate, the reaction temperature should not be too high. Keep it between 60℃ and 70℃. When the temperature is too high, impurities such as ether, sulfurous acid or ethylene will be produced. After the liquid is heated to boiling, it should be heated with a small fire. Several pieces of broken porcelain can be added to the test tube in advance to prevent the liquid from bumping.

4. Concentrated sulfuric acid is used both as a catalyst and as a water-absorbing agent.

⑵Na2CO3 can react with volatilized acetic acid to produce odorless sodium acetate, which is convenient to smell the scent of ethyl acetate.

6. In order to facilitate the production of ethyl acetate, the following measures can be taken:

⑴ When preparing ethyl acetate, the reaction temperature should not be too high.

⑵It is best to use glacial acetic acid and absolute ethanol. At the same time, an excess of ethanol is used.

7. The reason why Na2CO3 can't use alkali (NaOH): Although it can also absorb acetic acid and ethanol, the alkali will catalyze the complete hydrolysis of ethyl acetate, causing the experiment to fail.

Our company also has Ethyl Acetate Production Technology on sale, welcome to contact us.