Home > News > Do you know the Composition of the Distillation Column System?

Do you know the Composition of the Distillation Column System?

As a Hydrogen Peroxide Manufacturing Plant, share with you.

The distillation tower system is composed of simple distillation tower, reboiler, condenser, reflux tank and other equipment. Generally, it is arranged as close as possible to form an independent operating system according to the sequence of the process and in compliance with the requirements of the specification. Similar equipment is centrally arranged. For example, the condenser is generally arranged on the third floor, and the return tank is arranged on the second floor. 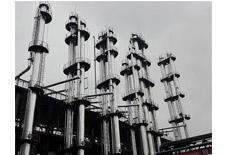 On the floor, the reboiler is installed at the bottom of the distillation tower, and the pump is arranged on the first floor. This is not only neat and beautiful, but also convenient to operate. Due to the particularity of the reboiler, its related equipment and pipelines need to be carefully designed.

The liquid at the bottom of the distillation column flows into the pipe, and the higher the pressure, the lower the pressure. If the pipe where the liquid rises is high, the pressure will drop to the point that bubbles (consisting of air or other gas) are generated in the pipe. The height of siphon action is determined by the formation of bubbles. Because the bubbles will break the liquid, the two bubbles

The force between the gas molecules at the side is reduced to 0, thereby destroying the siphon effect. The installation position of the thermosiphon reboiler is not as low as possible.