Home > News > How to Solve the Problem of Steam Running at the Bottom of the Distillation Tower?

How to Solve the Problem of Steam Running at the Bottom of the Distillation Tower?

As a Hydrogen Peroxide Manufacturing Plant, share with you. Steam running at the bottom of the distillation tower (that is, heating steam fleeing into the residual liquid and overflowing) is generally caused by the large amount and pressure of heating steam. At this time, the amount and pressure of steam can be reduced appropriately. If the liquid level of the residual liquid in the heating kettle at the bottom of the tower is too low (less than 1/2 of the total height of the tower kettle section), the phenomenon of less liquid and more vapor will also occur when the spent grains are discharged. 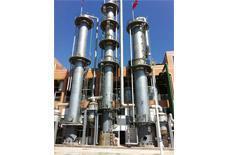 The solution is to temporarily close down or close the outlet valve to increase the liquid level and maintain the residual liquid height in the tower kettle section. When using a buoy-type drainer, if the buoy is stuck and cannot fall, it will also cause excessive discharge of the waste liquid. Therefore, we must pay attention to the mechanical failure of the drainer. If the height of the "u"-shaped siphon liquid seal tube used is not enough, it will also cause steam to run off the bottom of the tower. Therefore, the height from the lower end of the tube to the upper outlet is generally not less than 2.5 to 3 meters to balance the pressure and prevent steam running.

The working principle of the distillation tower:

In the fermented mature mash, not only contains alcohol, but also contains dozens of other components. If water is added, the content of these substances far exceeds the content of alcohol. The alcohol content in mature mash is only 7-11% (volume ), and impurities including water, alcohols, aldehydes, acids, and lipids account for almost 90%. To obtain pure alcohol, certain methods must be used to separate the alcohol from the mature mash.

In production, heating and distillation are used to separate substances with different boiling points, specific gravity, and volatility from different equipment to obtain higher purity alcohol.

The working principle of the crude distillation tower is that after preheating the fermentation mature mash, it enters the upper part of the crude distillation tower, and the bottom of the tower is continuously and evenly fed with heating steam. At this time, the liquid alcohol in the mature mash can be converted into alcohol due to heating. Gas, and other low boiling point and volatile impurities, all become gaseous and enter the aldehyde discharge tower together with alcohol (or directly into the rectification tower), and the distilled waste grains are discharged out of the tower at the bottom of the tower.

The temperature is too low, the alcohol in the wake-up is not completely evaporated, and the escape rate is obviously increased.

The boiling point of pure alcohol is 78.3℃, but the boiling point of the mixed liquid mixed with water and other ingredients is far more than 78.3℃. Therefore, the bottom temperature of the crude distillation tower should not be lower than 105℃, generally between 105℃-109℃.