Formaldehyde is one of the main downstream products of methanol, and its consumption accounts for 27%, ranking first in the methanol consumption structure.

However, on the whole, after the rapid development in the early stage, China's formaldehyde industry has formed the current situation of "overcapacity, fierce competition and low efficiency". In order to seek new development and get rid of difficulties, enterprises must expand the downstream industrial chain and realize product diversification. The extension of downstream industrial chain can improve the comprehensive utilization level of resources, reduce the comprehensive production cost, realize the efficiency increase and emission reduction of enterprises, so as to enhance the profitability of enterprises, turn low profit formaldehyde enterprises into dynamic enterprises, and enhance the ability of enterprises to resist market risks, which will be a strong driving force to promote the sustainable development of the industry.

Dmmn is internationally recognized as a new environmentally friendly fuel blending component to reduce fuel consumption and reduce flue gas emission. It has high cetane number (80 ~ 100) and good low-temperature fluidity. It can improve the combustion performance of diesel and reduce the emission of automobile exhaust. Its physical properties are similar to that of diesel. When it is mixed into diesel, there is no need to reform the fuel supply system of vehicle engine.

Table 2 Comparison of properties between common oxygenants and diesel oil

Many Chinese companies and abroad have successively developed and studied this product as a diesel additive. The test and application research show that the cetane number of diesel increases by 5-30% after adding 8-12% Dmmn. For every 3% of this component increased in the national standard diesel, the cetane number of diesel can be increased by one unit; Moreover, with the addition of 20% DMMn diesel, the smoke can be reduced by 80% ~ 90% and NOx can be reduced by 50%. At the same time, the thermal efficiency is higher than that of diesel alone.

The freezing point of DMMn can reach below - 30 ℃. Blending with diesel or other fuels can reduce the grade of diesel (0# diesel blending with 20% DMMn can reduce its freezing point to - 6 ℃), and due to the high oxygen content of DMMn, the blended diesel or fuel is especially suitable for high cold and anoxic areas. The experimental research shows that the lubricating performance of diesel oil is significantly improved after adding appropriate proportion of DMMn, which can replace the imported diesel anti-wear agent and solve the problem of poor lubricity of low sulfur diesel oil.

DMM2-4 is an ether solvent, colorless and transparent, with slight ether flavor, adjustable distillation range, moderate volatility and good stability. It can be used as an environmental friendly solvent (D20 ~ D70) to partially or completely replace aromatic hydrocarbons, alcohol ethers and their acetate esters, ketones, esters and other solvents. It has remarkable economic benefits and broad application prospects.

DMM2-4 has far more solubility than aromatics. It can dissolve resin (polyester, acrylate, epoxy resin, etc.) oil and wax. Its solubility is stronger than ether and acetone. It is a good substitute for aromatic solvents (toluene, xylene), DMF, halogenated hydrocarbons and ether solvents; DMM2 alone or selectively compounded with other conventional solvents can be widely used in the fields of rubber, adhesive, medicine, reclaimed rubber utilization, adhesive preparation, metal cleaning agent, perfume, oil for pharmaceutical intermediates, dry cleaning agent, printing and dyeing auxiliaries or preparation of paint diluent; Due to its low biological toxicity, the homologue methylal is of low toxicity (acute toxicity inhalation-rats LC50: 47g / m3; inhalation-mice LC50: 57g / m3 / 7h), and does not contain sulfur, lead, aromatics and other toxic and harmful substances, which can be biodegradable. Therefore, it can be used as a clean and environmentally friendly solvent to reduce harmful substances in paints, coatings and pesticides, Reduce health hazards to human body and serious pollution to atmosphere and soil. DMM2 ~ 4, 30 ~ 40% (W%) dissolved in water at room temperature, 4 ~ 5% (w%) of water dissolved in products, oil-water amphiphilic, is an ideal pesticide solubilizer, which can improve the mutual solubility of pesticide active components and water, and can even be directly used as emulsifiable concentrate; It can also be used as a substitute for organic solvent components in water-based paint (including emulsion paint), which can reduce the cost of water-based paint.

The process uses raw materials methanol and formaldehyde, passes through a new special specified bed reactor with special internal configuration developed by China University of Petroleum (East China), and then obtains the product through reactive distillation, coupled distillation, extractive distillation, pressure swing distillation and other technologies. The output can be produced in various combinations of DMM2, DMM3 ~ 4, DMM3 ~ 5 and DMM3 ~ 6, which can be flexibly adjusted according to the market and downstream conditions. 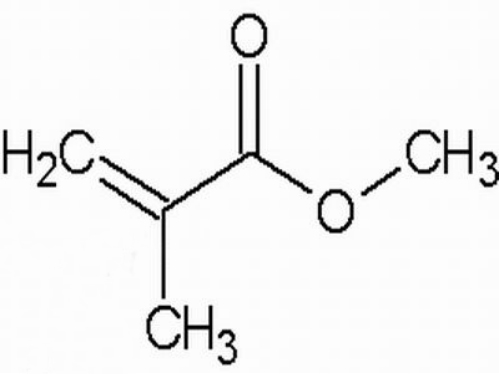 Methyl methacrylate is an organic compound, also known as MMA α- Methyl methacrylate, with molecular formula of CH5H8O2, molecular weight of 100.12, density of 994kg / m3, melting point of - 48 ℃, flash point of 10 ℃ and boiling point of 100-101 ℃, is a colorless liquid, soluble in ethanol, ether, acetone, etc., and its upper and lower explosion limits are 12.5% - 2.1%, volatile, flammable and explosive. It is an important chemical raw material and a monomer for the production of transparent plastic polymethylmethacrylate (PMMA). It is flammable, has strong pungent smell, has medium toxicity, reproductive toxicity and teratogenic effect, and should be avoided for long-term exposure. Its structure is shown in the right figure. The basic information and physicochemical properties of methyl methacrylate are as follows:

The purpose of MMA

Methyl Methacrylate（MMA） is mainly applied in manufacturing of plexiglass, coating, lubricating oil additive, wood wetting agent, paper polishing agent and so on. It is not a material of organic chemicals, but also can be directly used as chemical product. As a material, it is used in PMMA production, as well as in PVC additive ACR, the second monomer applied in acrylic fiber production. Apart from that, MMA is widely used in adhesives, coatings, resins, textiles and papermaking industry. 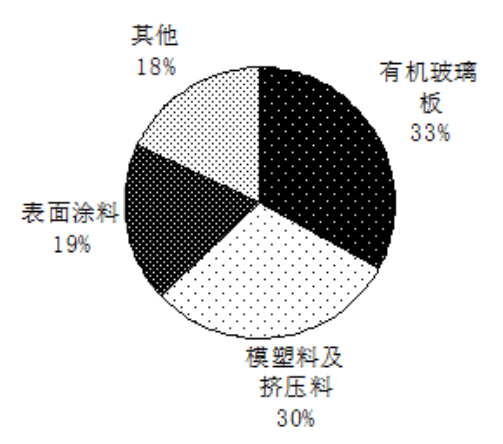 In China, the major demand for MMA is in PMMA production, PVC impact modifier and surface coating. MMA is mainly used in PMMA. With the rapid growing in advertising, furniture, construction, transportation and communication, the PMMA market expanded accordingly. In addition, due to the improvement of people’s living standard, plastic synthetic products will replace wood and steel products. The increase in demand for PVC products will drive the development of processing and impact modifier. At the same time, the proportion and output of high-grade water-based coatings will increase greatly, and the process formula will gradually integrate with environmental protection, so the demand for MMA will also increase gradually. MMA is used as raw material for ACR additives, and also for the production of acrylic emulsion. It is the key raw material for waterborne surface coatings. At the same time, MMA also has important applications in textile sizing, unsaturated polyester crosslinking agent, lubricant and artificial marble table.

Up to now, only few countries in the world realize the industrial production with ethylene process. And due to the catalyst, this process has not be carried out in large scale. The majority of MMA production is based on traditional way, namely the ACH  method and C4 method，and ACH method accounts for the higher proportion. The synthesis route of ACh method is complex with a long process flow, low yield after a multi-step reaction and high cost. Highly toxic hydrocyanic acid is used as raw material, and by-products such as ammonium sulfate and wastewater are harmful to the environment, which has been listed in the restricted use category by the state.

Through the operation with the research institute, SL CHEMTECH developed a reliable and clean coal-based production technology, which is an important extension of coal chemical industry and methanol downstream. It can make the best use of China's coal resources, and improve the MMA production technology in China. This process features in abundant, accessible and inexpensive raw material. The process is conducted in mild condition, thus avoid an oxidation under high temperature and high pressure. The discharge of three wastes is less than 50% of the existing mature process, so it is a clean and safe process. Through the cooperation with the research institute, SL CHEMTECH make a breakthrough in catalyst, which will be a slow deactivation and long service life of catalyst.

Compared with the  ACH process and C4 process,the mainstream in domestic MMA production, this process does not produce waste acid and salt, and there is no introduction of highly toxic substances such as hydrocyanic acid in the production process. The overall system is clean and stable. Conventional bulk chemicals are used as raw material so there is no need to match to specific raw material origin. One of the two MMA EPC projects, which are both contracted by Hubei Sanli Fengxiang Technology Co,. Ltd., makes its completion of intermediate handover of installation. And it is estimated to produce qualified product in October, 2021. The unit will become the world's first 10 thousand tons industrial demonstration unit of coal-based MMA technology.