In addition to physical methods of microbial control, chemicals are also used to control microbial growth. A wide variety of chemicals can be used as disinfectants or antiseptics. When choosing which to use, it is important to consider the type of microbe targeted; how clean the item needs to be; the disinfectant’s effect on the item’s integrity; its safety to animals, humans, and the environment; its expense; and its ease of use. This section describes the variety of chemicals used as disinfectants and antiseptics, including their mechanisms of action and common uses.

In the 1800s, scientists began experimenting with a variety of chemicals for disinfection. In the 1860s, British surgeon Joseph Lister (1827–1912) began using carbolic acid, known as phenol, as a disinfectant for the treatment of surgical wounds (see Foundations of Modern Cell Theory). In 1879, Lister’s work inspired the American chemist Joseph Lawrence (1836–1909) to develop Listerine, an alcohol-based mixture of several related compounds that is still used today as an oral antiseptic. Today, carbolic acid is no longer used as a surgical disinfectant because it is a skin irritant, but the chemical compounds found in antiseptic mouthwashes and throat lozenges are called phenolics.

Chemically, phenol consists of a benzene ring with an –OH group, and phenolics are compounds that have this group as part of their chemical structure. Phenolics such as thymol and eucalyptol occur naturally in plants. Other phenolics can be derived from creosote, a component of coal tar. Phenolics tend to be stable, persistent on surfaces, and less toxic than phenol. They inhibit microbial growth by denaturing proteins and disrupting membranes.

Since Lister’s time, several phenolic compounds have been used to control microbial growth. Phenolics like cresols (methylated phenols) and o-phenylphenol were active ingredients in various formulations of Lysol since its invention in 1889. o-Phenylphenol was also commonly used in agriculture to control bacterial and fungal growth on harvested crops, especially citrus fruits, but its use in the United States is now far more limited. The bisphenol hexachlorophene, a disinfectant, is the active ingredient in pHisoHex, a topical cleansing detergent widely used for handwashing in hospital settings. pHisoHex is particularly effective against gram-positive bacteria, including those causing staphylococcal and streptococcal skin infections. pHisoHex was formerly used for bathing infants, but this practice has been discontinued because it has been shown that exposure to hexachlorophene can lead to neurological problems.

Triclosan is another bisphenol compound that has seen widespread application in antibacterial products over the last several decades. Initially used in toothpastes, triclosan is now commonly used in hand soaps and is frequently impregnated into a wide variety of other products, including cutting boards, knives, shower curtains, clothing, and concrete, to make them antimicrobial. It is particularly effective against gram-positive bacteria on the skin, as well as certain gram-negative bacteria and yeasts.

Handwashing is critical for public health and should be emphasized in a clinical setting. For the general public, we recommend handwashing before, during, and after food handling; before eating; before and after interacting with someone who is ill; before and after treating a wound; after using the toilet or changing diapers; after coughing, sneezing, or blowing the nose; after handling garbage; and after interacting with an animal, its feed, or its waste. The following figures illustrate the five steps of proper handwashing recommended.

Handwashing is even more important for health-care workers, who should wash their hands thoroughly between every patient contact, after the removal of gloves, after contact with bodily fluids and potentially infectious fomites, and before and after assisting a surgeon with invasive procedures. Even with the use of proper surgical attire, including gloves, scrubbing for surgery is more involved than routine handwashing. The goal of surgical scrubbing is to reduce the normal microbiota on the skin’s surface to prevent the introduction of these microbes into a patient’s surgical wounds.

There is no single widely accepted protocol for surgical scrubbing. Protocols for length of time spent scrubbing may depend on the antimicrobial used; health-care workers should always check the manufacturer’s recommendations. According to the Association of Surgical Technologists (AST), surgical scrubs may be performed with or without the use of brushes. 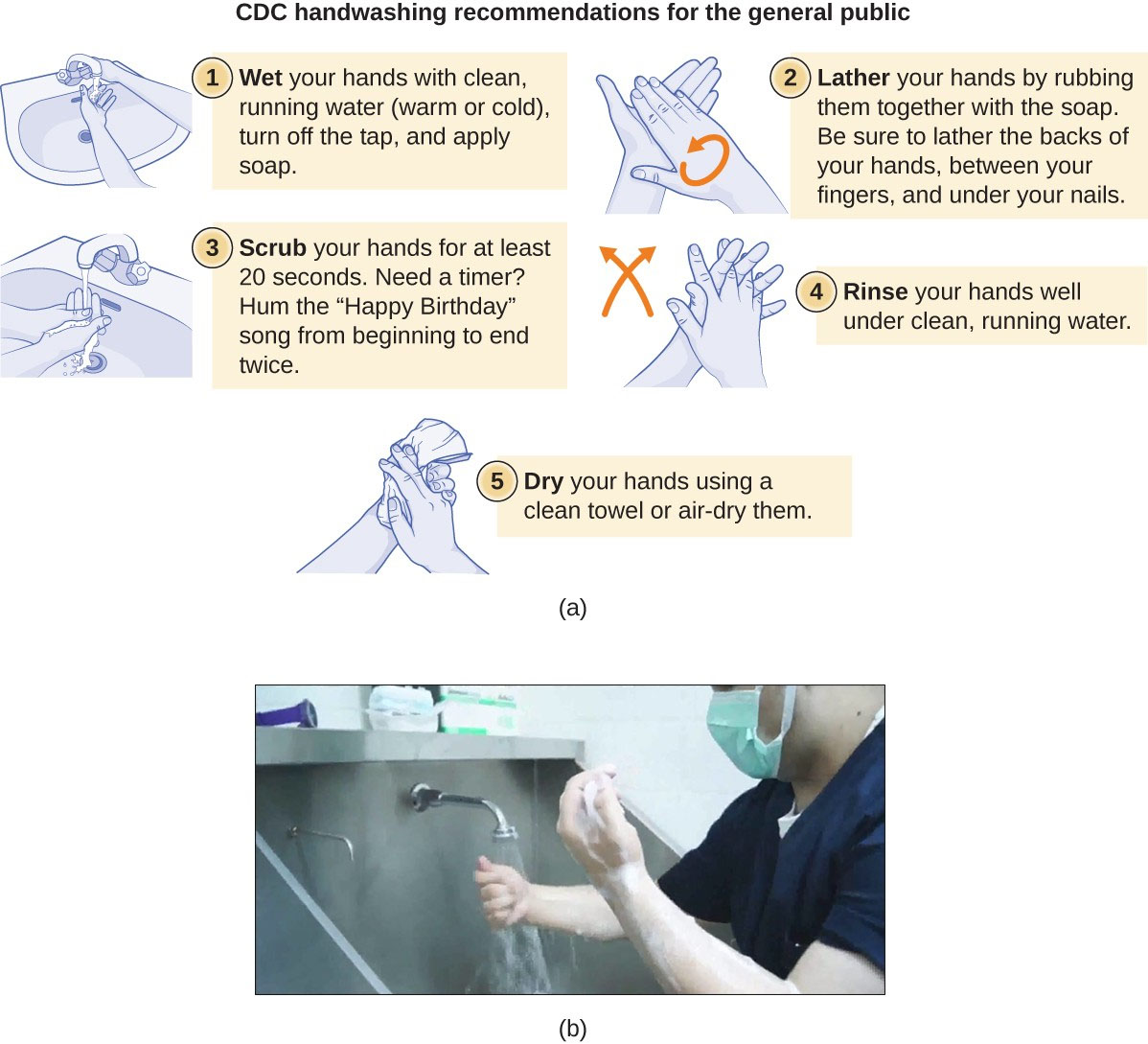 Figure (a) We recommend five steps as part of typical handwashing for the general public. (b) Surgical scrubbing is more extensive, requiring scrubbing starting from the fingertips, extending to the hands and forearms, and then up beyond the elbows, as shown here.